Time for a fun post and something simple while I’m still tackling brain fog and fatigue that makes snails look fast.

It’s been quite some time since I posted an update of my postcrossing adventures, but I’ve been getting back into the habit slowly this year and have a few new favorites to share.

For those of you new to the blog in the last year or so, postcrossing is a hobby in which you receive the address for someone in the world, write them a postcard, and when they mark that card received YOUR address gets handed off to someone else so that you can receive a card. You never know where in the world the cards will come from or who you might meet. Most people treat these as one-time interactions, but I have actually found a long term pen pal this way.

This first one is from Russia. The postcrossing project asks that all cards be written in English (unless the person you are writing to has specified they can read another language), but unfortunately this one is written IN Russian so I’m not sure what was said. The handwriting is very flowy and beautiful though!

I like this card for the foxes, but also for the unusualness of it being what looks like possibly a cross-stitch pattern? I’m terrible at handicrafts though I do have distant wishes of one day knitting and crocheting and cross-stitching. Tatting is about the only thing I ever picked up and only briefly.

South Africa now! A location I don’t hear from all that frequently. (There are definitely countries with far more postcrossers than others. For example that card from Russia is in the 6 million range for cards from that country while the South Africa one is only about 130,000.)

This person tells me that Cape Town is their hometown but that they love to travel. They haven’t been to the United States yet, but have seen many parts of Europe. Afrikaans is their native language and they tell me that it is very similar to Dutch. I love languages, but have a horrible time pronouncing Dutch. I wonder if I’d be any better at Afrikaans? 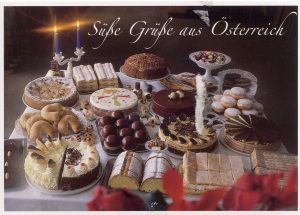 I admit that I love food cards. Not just because I love food, but because it is so very different all over the world! This card comes from Austria and from a woman who says she is a chocolate confectioner by profession. Yum!! The greeting on the front translates to “Sweet greetings from Austria”. It’s a shame I’m not able to sample some of her own creations! 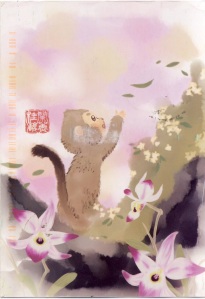 Illustration cards from various parts of Asia are some of my favorite cards I receive. Even though the art styles and subject matter vary widely I can’t help but fall in love with them. This adorable monkey comes to me from Taiwan. It isn’t the year of the monkey right now in the Chinese zodiac calendar, but this little guy seems content to enjoy what looks to be a lovely springtime day while he waits for his moment in the spotlight again. 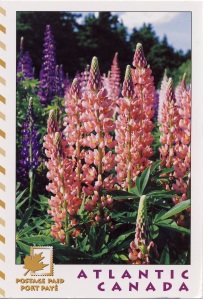 The final card in this post is from Canada. Postcards don’t always have to come from far away for me to love them! These flowers are lupins and the sender tells me she has a lot of them growing at her home. I think they’re gorgeous! Maybe someday I’ll get around to planting flowers at my house… in the meantime I’ll stare at the beautiful flowers that come to me on postcards.

Have a favorite? I’ll share more again later in the year once I’ve sent (and received) more cards!

Maggie playing chase with her neighborhood lookalike. So happy she gets along with him! #playtime #lookalikes #dogfriends #playingchase #newtotheneighborhood

I do not use affiliate link programs. Any links given are given with no return compensation to myself unless otherwise specifically noted. All photos are taken by myself or given appropriate credit, either on the image itself or someplace within the post in which it appears.
%d bloggers like this: