I had an imaginary friend for years. In some ways I think she never went away, but rather merged into my creative subconscious.

Imaginary friends are quite the interesting topic to think about whether it’s your own personal memories, wondering about the psychology of the phenomenon, or just getting a smart punch in the feels when media brings up the topic. (Bing Bong, anyone?)

“The Adventures of Beekle: The Unimaginary Friend” by Dan Santat is sweetly written and stunningly illustrated. The image of Beekle makes me think he could possibly be a distant cousin to Baymax, which honestly is something I’m more than okay with. (Beekle and Big Hero 6 were both released in 2014, but obviously have nothing to do with one another.) 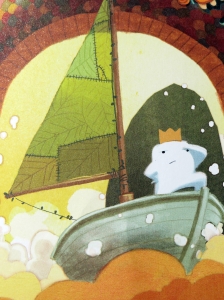 When Beekle isn’t called off to the human world by a child’s imagination, he decides he’ll just set out and find his own child instead. His initial impression of the human world is that everything seems… not quite right. The kids he sees aren’t stuffing themselves with cake, everyone is in a rush, and he isn’t quite sure there’s a place for him after all.

But as is so often in both life and stories, right when he thinks he just might give up, the perfect friend comes along.

While I certainly enjoyed Beekle’s story, the art is what really swept me away with this book. The illustrations are vibrant yet easy on the eyes, with just the right amount of detail to keep you enjoying the pictures each time you see them. Dan’s art is everything about picture books that I love and remember from being a kid.

*Is there a children’s book about poetry, books, or creativity that you want me to check out? Make sure to leave the suggestion in the comments!