I may not be a “girly girl” in a lot of ways. I’m not big on makeup. I don’t spend much money on my hair, either at the stylist or on products at the store. I love looking at jewelry, but usually only wear a few select pieces. I really don’t care if anyone knows the brand name of my purse or my clothes. Honestly I don’t care if I know it. I try to keep my nails nicely shaped, but don’t paint them too often. In fact… I’ve only ever had my nails done at a salon twice: once for my wedding and once to meet two of my favorite Japanese musicians before seeing them perform live. Sense a trend?

But on the things where I do get “girly”, I go all out. I own ball gowns. Not just dresses (some of those too of course), but full on wear-one-or-two-petticoats-beneath-them BALL GOWNS. When I do style my hair I usually go for curls. I love a good, bright red lipstick. I have good daily hygiene, I just also value things like sleep and hobbies, so the expensive or time-consuming “girly” sorts of things are out the window when it comes to day-to-day life. 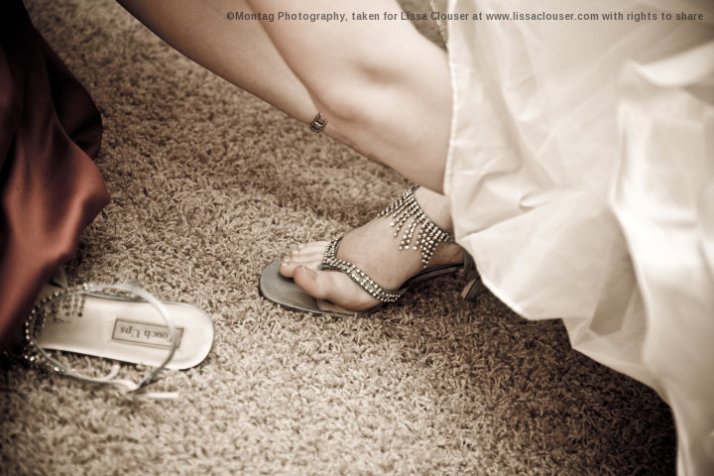 My incredibly awesome shoes from my wedding. I wore them the entire day they were so comfortable.

I put off KonMari tidying my shoes. I had more than I needed, but despite my love for heels I really didn’t have an absurd number of them. A couple pair of 5-6″ heels. Maybe half a dozen pair of your more standard 2″ heel, in a variety of colors. A few other oddities… probably no more than 12 or 13 in total. And then I did the hardest tidying I’ve done yet: I tossed almost all of them.

In 2012 I was diagnosed with Mixed Connective Tissue Disease, an autoimmune disorder. One of the most common effects of that for me personally is that my joints and muscles frequently hurt. Sometimes I even get swollen from the inflammation inside my body. Over the last 2-3 years I have had to cut back on how often I wore heels because doing so could cause my feet to swell. The more extreme the heel, the more I had to watch out for that, but even with my shortest heels I still had to be careful. That was okay. As much as I loved heels, I already wasn’t wearing them every day even when I was healthier.

May of 2016 may have been my healthiest month in a long time. I’d had a string of several months with low or mostly ignorable symptoms. It was one of those high points where it was almost easy to forget I was “sick”. I was walking my way up mountain paths with only normal, out-of-shape style symptoms!

By the fall, as I continued my intermittent tidying efforts, I came to accept a conclusion I think I’d made awhile back. I can’t wear high heels like I used to. There will be special occasions when I still break them out, no matter the hurt they may cause, but my days of randomly throwing on a pretty pair of heels are pretty much over. My ankles have not gone down in swelling since June. Yes, I’ve seen doctors. No, there is nothing imminent to be worried about otherwise. They’re just… swollen. My legs in general are swollen, but especially from the knees down. And my feet. And this week my hands too… (it doesn’t help I’ve gained about 15 pounds since May EITHER, from a combination of things, many of which I hope to reverse this year to at least keep my weight at a better spot even if it doesn’t much change the other problems).

I don’t like giving up anything because I’m “sick”. Those are the moments when I realize that this isn’t a cold or flu that will be gone in a week. I like it even less that it has now expanded into one of the few girly, feminine things I really enjoyed. It’s funny, isn’t it? To be self-conscious over swollen ankles. I’ve been self-conscious over lots of things throughout my life. Overcome many of them. Occasionally still fight myself over the others. But my ankles? It feels bizarre. And yet… it makes me not want to wear anything that shows my ankles. It makes me oddly jealous of people I see in the store or on TV. Okay, okay… I’m a size 8-10, not a size 4 like I used to be. That sucks. BUT MY ANKLES. That’s where I’m hung up. I see people who are several sizes larger than me and still have awesome ankles. It feels weirdly unfair. And there’s nothing I can really do about it.

So here’s to slim ankles and pretty shoes. And being okay if I never get back to that again. I cleaned out all but the dearest few shoes and opened up room for other things in my closet. It was time. It’s part of the acceptance. And it’s time to focus instead on the things that still make me feel beautiful, high heels be damned.

5 thoughts on “The Quest to Tidy: Shoes and a Confession”